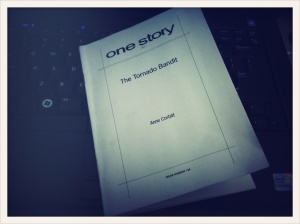 We had some scary storms yesterday in Massachusetts. The town where my boyfriend works got hit pretty hard, and today my thoughts are with all of those in Springfield, Monson, Westfield, and other towns that were affected by the tornadoes last night. Cambridge didn’t get much more than some rain and cloudy skies, but it was kind of a nail-biter with all of the news coverage and Mike’s phone battery on the fritz. Glad to say all is well with him.

My apartment is kind of a mess these days, with roommates moving out and a new roommie moving in. Last night was spent watching the news and cleaning up for the transition. During the reorganization, I found all of my old One Story magazines that I hadn’t yet read. This morning I found one in the kitchen (not sure how it got there) titled “The Tornado Bandit” by Anne Corbitt. I thought, Maybe it’s a sign, and read it on the train this morning. I’d read it before, but it was a welcome re-read.

Corbitt’s characters are the richest part of the narrative, which says a lot since the story is rife with mystery, adventure, and CIA secret agents. The story begins with this scene: The Miltons return home from Tennessee to find their house ransacked and a dead body in their guest bathroom. The struggle didn’t originate in their home, however, having busted through two other houses before ending in theirs. This brings together three very different couples: The Miltons who have settled into a cookie cutter lifestyle; the Billings who can safely be referred to as the rednecks with big money signs in their eyes; and the Finkelsteins, the Orthodox Jewish couple from down the street. Leah Finkelstein witnessed the Tornado Bandit and his later victim struggling in her home; the experience eventually drives her mad.

But rather than a mystery these couples can figure out, the Tornado Bandit becomes something else. The Miltons, particularly Carl, realize how boring their life has become and how little they have left of it. Late night rides in the cars off the car lot where Carl works and stints at the casinos in North Carolina become a regular occurrence for the couple that’s been shocked out of their routine.

The Billings, prompted by an invitation from Oprah, want to pursue a singing career for Tanya. The Finkelsteins deal with their own, tragic kind of change. Leah Finkelstein loses her grip on reality more and more, until finally she is tranquilized and numbed to the world around her.

The story has a surreal quality to it, like the Tornado Bandit somehow stopped time for these three couples, and we are watching their actions in the interim. The story ends with time picking back up again, ironically with the slowdown of the Miltons’ lives, the disappearance of the Billings, and the silence from the Finkelsteins’ house.

There is an eerie quality to Corbitt’s writing, and also a real sense of her characters that allows their faults and dreams to mix together to create a fullness admirable in such a short story. Want to read the story? Check out One Story‘s archives or leave me a comment with your favorite characters and why, and I’ll send you my copy. I’ll pick a winner and send the copy out next week. Don’t forget to leave an email where I can reach you!

It’s been a slow week for me as far as Short Story Month updates go. Came into the office today because I’m getting picked up from here, which meant two fewer hours of sleep than I usually get on Thursday nights. To better ease myself into the day, I decided to take a quick fiction break this morning and read “Fact of Life” by Alison Barker at fwriction : review.
END_OF_DOCUMENT_TOKEN_TO_BE_REPLACED

Even when I’m busy, but I need that bit of a pick-me-up, Staccato Fiction is always there for me. If I sound like an addict, it’s because I am. Today I read “Those Plums,” but there’s no author name credited! I’ll try and figure this out, and update you on who’s responsible for this little gem. (Update 5/20: I just went to the Staccato Fiction site and saw that the story is credited now! Thanks, Harley Crowley for a lovely story.)

Reminiscent of Julio Cortazar a la “Blow Up and Other Stories,” and Gabriel Garcia Marquez, the world in “Those Plums” quickly shifts from recognizable to slightly distorted. It’s like those seemingly identical pictures side-by-side where one of them is slightly different. The story’s world after the second paragraph is slightly different. Slowly we begin to realize something is not right, along with the narrator. The other character in the story – inexplicably gaunt – is explaining his predicament, and his voice (I could hear it) is weak with his inexplicable exhaustion. All we know is that it began happening after he ate “all those plums.” The narrator continues to relate to this new world as though it were the old, recognizable one, and is met with further unmistakable clues that, no, this is no place that she knows.

Whomever this author is, s/he did an incredible job of building up a reality that gets knocked down so quickly. Four paragraphs! That’s all s/he needed to knock my socks off.

What I’ll be reading very soon.

Like  I keep saying, I’m almost done with the Oates memoir. Last night, I picked up two books from the library to ease my fear that I will be without reading material while I’m away again this weekend. Both of my picks are short story collections to continue my celebration of Short Story Month 2011, and to hopefully find some fodder for more short story reviews. What’s on the docket? I’m glad you asked…
END_OF_DOCUMENT_TOKEN_TO_BE_REPLACED

A Hunger Artist by Franz Kafka

It’s sunny out! I took advantage of working from home today and went for a little walk to the coffeeshop here in Ludlow, The Radical Roaster. It’s adorable and serves peanut butter + nutella lattes. It was the perfect inspiration to get reading and writing today, to start off the weekend right!

As a continued celebration of Short Story Month 2011, I revisited Franz Kafka’s “A Hunger Artist.” I was reminded of this story in Joyce Carol Oates’s A Widow’s Story, which I’m currently reading. The story is amply available on the internet.

David Foster Wallace talked about Kafka’s humor in his speech, aptly titled, “Laughing with Kafka.” He talked about how many of his literature students missed the point, that Kafka was painfully funny, but not in the way many people these days are funny: END_OF_DOCUMENT_TOKEN_TO_BE_REPLACED

Story of the Day from Storyville

The truth is, I haven’t been taking advantage of my Storyville app as much as I should be. Last night, wired from an ill-advised cup of coffee at my writing group, I read “Ms. Yamada’s Toaster” by Kelly Luce. What a great story to fall asleep after.

Luce’s tale has several facets: Superstition, mortality, mob mentality. It’s the ultimate curiosity-killed-the-cat story, except in this case, humans are the cat and the curiosity is morbid, about the way in which they will actually be killed. The story is set in China, narrated by a child who makes deliveries for his father’s liquor store and retrieves the empty bottles from the customers.
END_OF_DOCUMENT_TOKEN_TO_BE_REPLACED 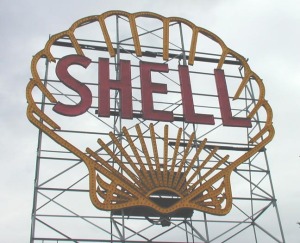 Simon, from my writing group, is always telling me to read Sam Lipsyte. He says that the darkness in my stories reminds him of Lipsyte’s, a compliment I secretly gobble up. I don’t try to be dark for the sake of being dark, but it’s always nice to hear the visions that I see match up – if only slightly – to what my readers see.

Yesterday I received a frantic email telling me that there was a Lipsyte story, “Deniers,” in last week’s New Yorker. So I read it.
END_OF_DOCUMENT_TOKEN_TO_BE_REPLACED

Okay, so maybe I’m comparing apples to oranges, but let’s get stoked for what May’s really all about: Short stories! Check back here and at TTTR’s Tumblr for short stories you should check out all month long.

Just wanted to drop in real quick and recommend you read “Jesus-es” by Sarah Lefkowith over at Staccato Fiction today.

Because Lefkowith illustrates the divide between religion and relationship, iconography and a living, breathing savior. I am a defunct Christian, but like Judaism has become more a culture and an identity than strictly a religion, I feel a connection to the stories and beliefs associated with the Bible. Call me crazy, hypocritical, confused, but “Jesus-es” touched on a dual-citizenship I hadn’t realized that I subscribed to.

Lefkowith’s story is a succinct portrayal of what it is to respect another’s beliefs and to see yourself through that person’s filter, even if that other person’s filter includes the tiny plastic eyes of Jesus-es.

What I Wish I’d Written:

” I use Jesus in my speech, sometimes. ‘Jesus fucking Christ!’ I yell at the biker who nearly slices me in half. ‘Watch where you’re going, jackass!’ Or, after a long day at work – ‘Christ, I need a drink.’ Or a reference to Mary – a whispered ‘Holy Mother of God’ – in stunned reaction to the truly horrendous redecorating my roommate has done in our kitchen. I have a pop culture Jesus. I have a non-religious Jesus. I have the Crystal Light version of Jesus or maybe an I-Can’t-Believe-It’s-Not-Jesus margarine blend.”

Next week, on The Things They Read…

Well, perhaps not next week, but in the coming weeks I have some great reviews planned! Despite not having a review mailbox (PO boxes ain’t cheap) listed on the blog, I am always open to receiving books to review! My list tends to lean toward books that have been out a while, so receiving newer books is always a great incentive to keep up to date on the current publishing scene. So, what do we have in store?
END_OF_DOCUMENT_TOKEN_TO_BE_REPLACED

The things they wrote about.

about the things they read

This is a love letter to the story. It is a time capsule for future generations of writers and readers. To those who cannot know us and who will only know what we leave behind: The things we wrote and the things we read.

If you're into sharing, comment on a post, give us an idea for a guest post, or send us an email or two, or maybe more than two. Whatevs, your call.

You're all such lovely bones.